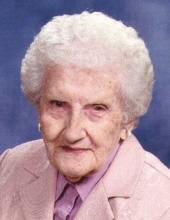 Burial will be held in St. James Catholic Cemetery in Forest City.

Mary Elizabeth Fox was born March 8, 1921, the daughter of Joe and Mary (Tobin) Byers. Mary met Chic at the Surf Ballroom in Clear Lake where he was a dance instructor. There were many memories of them winning dance contests. They were married August 12, 1941.

Mary attended AIB Business School in Des Moines, Iowa. She worked at Maben Insurance and Rueben’s Department Store, she was also a receptionist at Forest City Hospital and for Dr. Tom Mangan. They farmed for five years before moving to Forest City in 1946. In 1951 they purchased Ruby Evan’s Mobil Gas Station 3 miles south of Forest City, renaming it Fox Trading Post. During the 1960’s they had dances on Saturday nights. Chic and Alton Brandl grilled half chicken and Mary prepared baked beans and coleslaw for $1.50 a plate. They operated a USDA Kennel for 25 years raising and buying litters of puppies and shipping to pet stores.

Mary and Chic enjoyed going to auctions and participating in flea markets, Mary set up 26 tables of antiques for sale. Mary enjoyed baking and cooking and was known for her good pies.