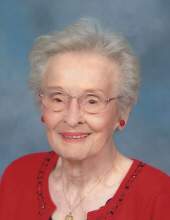 Mary was born in Fort Dodge, Iowa on March 2, 1916 to Adam and Maria (Stang) Schmidt. She was one of eleven children that lived on their family farm in Iowa. She married, Philip Schmidt in 1945. Mary worked on the family farm and in the factories during WW II in Chicago.

She was a lifelong member of Sacred Heart Church where she worked in the rectory and also volunteered as a playground monitor at the school.

She was preceded in death by her parents; husband, Philip; daughter, Patricia McLennan; son-in-law, Samuel Thomas; and eight siblings.
To send flowers to the family in memory of Mary S. Schmidt, please visit our flower store.