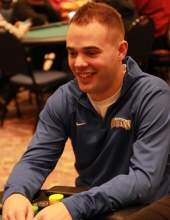 Celebration of Life Services will be held 10:30 A.M. Wednesday, July 13, 2016 at the Fertile Lutheran Church with the Pastor Dave Halvorson officiating.

In lieu, of flowers, memorials may be directed to the Matthew Hauge memorial fund in care of the family.

Matthew Ryan Hauge was born on August 11, 1989, at Naeve Hospital in Albert Lea, MN to Craig and Teresa (Heimdal) Hauge. He was the youngest of three sons. Matt grew up in the Forest City area where he attending school, later graduating from Mason City High School in 2008.

Growing up a Hauge meant you were immersed in baseball from the start and having 2 older brothers to watch and emulate paid off for Matt as he excelled in the sport. His second passion was running and he joined the Cross Country and Track teams during high school to fulfill that passion. At age 14 he ran in the Junior Olympics in Miami. After graduating Matt joined the Army Reserves and attended NIACC where he received his AA degree. Matt also spent time at Iowa State University and Mankato State working towards his Bachelors Degree.

Matt was turning his love for Texas Hold ‘Em into a career and began traveling the country to play in larger tournaments, earning himself a free entry into the WSOP Global Casino Championship to be held in August. The poker community was, in a sense, a second family to Matt, one that he embraced.

Matt was that smart, funny guy with a huge personality and quirky smile to his friends and family.