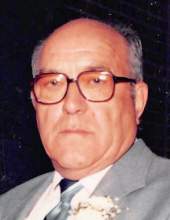 Funeral services will be held 1:30 P.M., Tuesday, May 19, 2020 at Cataldo Funeral Chapel, 160 E. 4th St., Garner with Rev. Michael Schafer officiating. Military rites will be conducted by the Garner Veterans Ceremonial Unit. The service will be livestreamed on the Cataldo Funeral Home Facebook page and available for viewing after the service on the funeral home website Tribute Wall. Burial will follow at Evergreen Cemetery in Clarion.

Visitation will be held one hour prior to services at the funeral chapel. Memorials may be directed to the Garner United Methodist Church.

Maynard W. Isenberger, the son of George and Minnie Isenberger, was born November 16, 1919 in Dickson, Missouri. He grew up in Clarion where he graduated from high school. Maynard served his country during WW II in the U.S. Army as a field lineman in Central Europe. Following his honorable discharge in 1945, he returned home to work in Clarion. On September 8, 1951 he married June Mae Roosa in Moline, Illinois. They lived in Clarion, Carroll, Osage, Forest City and in 1969 moved to Garner. Maynard was employed as an egg plant manager in Osage and later worked at Winnebago in Forest City until his retirement. In his retirement, he mowed lawns and tilled gardens in the Garner area for many years. He enjoyed gardening and having coffee in the morning with friends at the local grocery store. Maynard was very proud to have celebrated his 100th birthday at the Garner United Methodist Church this past November.

He was a member of the Garner United Methodist Church and the Garner VFW.

He was preceded in death by his parents; wife, June, Aug. 17, 1995; an infant daughter, Deanne; and many brothers and sisters.
To send flowers to the family in memory of Maynard W. Isenberger, please visit our flower store.