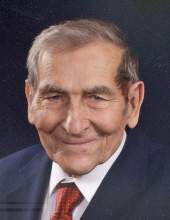 Memorial services will be held 10:30 A.M., Wednesday, September 28th at First Lutheran Church in Britt with Rev. William Rosin officiating. Burial will be in Evergreen Cemetery with military rites by the Britt Veterans Ceremonial Unit.

A memorial visitation will be held from 4 to 7 P.M., Tuesday at First Lutheran Church in Britt and will resume one hour prior to services at the church. Cataldo Funeral Home in Britt is in charge of arrangements.

Memorials may be directed to the American Red Cross of North and Western Iowa.

Melvin Carl Pergande, the son of Fred and Emelie (Gronbach) Pergande, was born January 27, 1924 at LuVerne, Iowa. He attended parochial school at LuVerne until the eighth grade and then worked for various farmers in the area. He served his country in the U.S. Army during WW II in the European Theatre. After his discharge he returned home where he met Alma Prull while attending a Luther League function. On September 21, 1948 they were married at First Lutheran Church in Britt. They lived their entire married life in Britt where they raised their four children. Mel was employed as a drag line operator for Sankey Sand and Gravel and Herman Buns and Son Construction for many years. He also worked at Winnebago Industries and LaHarv Construction in Forest City where he retired from at the age of 84. Mel enjoyed his family and was especially happy getting together for family "sing-alongs". He also enjoyed woodworking, gardening, bird watching and completing word search puzzles.

He was an active member of First Lutheran Church where he served as council member, Sunday school superintendent, Sunday school teacher, usher captain and sound system operator. He also belonged to the Britt American Legion, worked with the American Red Cross and delivered Meals on Wheels in Britt with Alma for many years.

He was preceded in death by his parents; and six siblings.
To send flowers to the family in memory of Melvin C. Pergande, please visit our flower store.