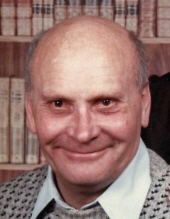 A memorial visitation will be held from 5 to 7 P.M., Wednesday, July 23rd at the Cataldo Funeral Chapel, 160 E. 4th St., in Garner. Inurnment will be held at a later date at the Iowa Veterans Cemetery in Van Meter.

Melvin Martin Petersen, the son of Martin and Ida (Larsen) Petersen, was born December 28, 1922 in Salix, Iowa. He was the youngest son of an immigrant from Horsens, Denmark. Melvin grew up on a farm near Sioux City, speaking Danish until he entered grade school. As a teenager, he worked at the Sioux City Airport and later at the Armour Packing Plant in Omaha, where he became an unwilling participant in one of the city's most notorious bank robberies. He was drafted in the Army during WW II -- basic training at Camp Grant in Rockford, IL, where his eardrum was ruptured during intake medical examination, and served in the European Theater. Following his honorable discharge, he went to watch-making school at the American Academy of Horology in Denver, CO, where he met his future wife and fellow Iowan, Betty Alice Tourte, on a blind date. They married at Paton Evangelical United Brethren Church on July 6, 1948. After briefly working as an assistant watchmaker in Clarion and Belmond, he established his own watchmaking business and jewelry store in Garner in 1952 that he ran for almost 50 Years. Customers included family, neighbors, friends, and Iowa governor, Terry Branstad. Melvin loved to travel, including visiting Becky in Venezuela, Tom in South Africa and Geni in New Mexico. He was a world traveler, but never lost his small-town Iowa sensibilities and values. Many cross-country family camping vacations with his wife and kids, when they were younger. He loved mountains, especially the Canadian Rockies. Always learning, at the age of 90, he took a family trip to Montana, where he stood in 100 degree heat to hear the story of The Battle of Little Big Horn. Afterwards, he stated that he learned there was good in everyone, and that no one was perfect or entirely right. In fact, he often stated that the only perfect person the world has ever seen is Jesus Christ. He was a lifelong learner and soaked up information like a sponge. He believed that the more you know, the more enriched and enhanced your life will be. It was certainly true in his case. He remained steadfastly the same wonderful man he always was, the same optimistic person and positive thinker he always was, even as he continued to learn and grow. This optimism came from his faith, and especially from the teachings of the great United Methodist clergyman Norman Vincent Peale, who often cited Grandpa's favorite Bible verse, "I can do all things through Christ who strengthens me." (Phillippians 4:13, NKJV). He gave an equal share of his love, time, and efforts to his children, grandchildren, friends, and neighbors, and is known, especially to his grandchildren, for his wise and entertaining stories about life and all of his personal experiences that shaped him into the man they knew. When his children moved, he and Mom would be there as soon as they could.

He was an active member of Garner United Methodist Church, Garner American Legion and the Garner Chamber of Commerce.

The family would like to thank the following staff at the Hospice of North Iowa in Mason City: Diane, Nancy H., Mary, Tammy, Todd, Shirley, Julia, Carolyn, Louise, and Cheryl (nurses); Nancy G., Cindi, Lori, and Darcy (health aides); Sharon (hospital liaison); Dr. Weissinger; Connie B. (hospice director); and Amber (social worker). Your expertise in compassion made all the difference.

Memorials will be donated to the Hospice of North Iowa.

To order memorial trees or send flowers to the family in memory of Melvin M. Petersen, please visit our flower store.
Send a Sympathy Card