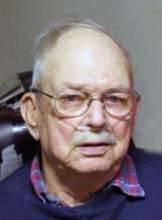 Funeral services will be held 10 A.M., Friday, December 13th at the Cataldo Funeral Chapel, 160 E. 4th St., in Garner. Burial will be in Concord Township Cemetery. A luncheon for friends and family will commence at 11 am at Mat's Place in Garner with parking encouraged along the north side of the building.

Visitation will be held from 4 to 6 pm, Thursday at the Cataldo Funeral Chapel.

In lieu of flowers, the family requests that memorials be directed to the local food bank, God's Pantry or The Humane Society of North Iowa.

Merle John Gouge, Sr. the son of David and Alice (Stockwell) Gouge, was born April 21, 1927 in Latimer, Iowa. Along with his parents and eight siblings, he grew up throughout the Wesley, Britt and Algona areas. At the age of 19, while working as a farm hand, Merle met the love of his life, Marian. On February 10th, 1948 they married at St. Michaels Catholic Church in Whittemore. A short time later they moved to Garner, where they raised nine children. Merle worked hard to provide for his family. Much of his adult life centered around trucks. From driving and delivering to owning and operating, through tearing apart and rebuilding, he spent countless hours down at the shop. He loved every minute of it. Merle always looked to family gatherings, enjoying any opportunity to shoot the breeze. His favorite past time included sitting back in his chair, watching baseball (often several games at a time) cheering and/or cussing out the Twinkies, all the while, chewing his cigar. "Gramps" always liked to tease and appreciated a good joke. Many memories that continue to make us chuckle include the times he had Gran sew the boys' pant legs closed while they slept and his infamous gas-passing machine. He loved playing with his dogs; Tasha, Jr., Shadow and Teeny. He was very proud of his family heritage "those moon shiners from Tennessee" and often liked to tell the tale of "The Crime of The Century". Although he will be sadly missed, we are certain that he is now reunited with the love of his life, Marian.