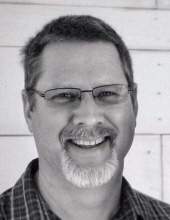 Funeral services will be held 10:30 A.M., Wednesday, December 13th at the United Methodist Church in Garner with Rev. Paul Evans officiating. Burial will be at Buffalo Township Cemetery near Titonka.

Visitation will be held from 4 to 7 P.M., Tuesday at the United Methodist Church in Garner and will resume one hour prior to services at the church. Arrangements are with Cataldo Funeral Home of Garner.

Michael Eugene Movick, the son of Eugene and Roberta (Dohlman) Movick, was born February 20, 1962 in Clarion. He attended kindergarten at West Union before moving with his family to Titonka as a first grader. He graduated from Titonka High School in 1980 and continued his education at Northwest Iowa Tech in Sheldon for two years. On October 9, 1982 he married Diana Wibben at the United Methodist Church in Titonka. They made their home in Richfield, Utah in January of 1983 where Mike was employed at Georgia Pacific as an electrical engineer. In May of 1989, they moved to Fort Dodge and Mike began working for National Gypsum. In 1994, they moved to Garner. Mike was employed by Van Meter Electric in Mason City until 1997 when he began working as an automation engineer for TTI in Clear Lake. He enjoyed his family, hunting, fishing and golfing. Papa Mike loved spending time with his grandchildren and was an outstanding grandpa.

He was a member of the Garner United Methodist Church where he served on several committees, was a Sunday School teacher and a mentor taking the church youth to Arkansas to visit the Heifer Project headquarters. He also belonged to the Garner Jaycees.

He was preceded in death by his father, Eugene Movick in 1971; and his father-in-law, Harold Wibben.
To order memorial trees or send flowers to the family in memory of Michael E. Movick, please visit our flower store.