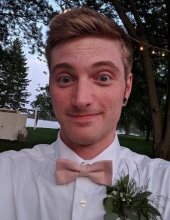 Burial of cremains will be held at a later date.

In lieu of flowers, memorials may be directed to the family where it will be used for a future scholarship fund.

Michael Jon “Mick” Wright was born to Paul and Jane (Morphew) Wright in Clarion, Iowa on September 12, 1991. Mick graduated from Forest City High School in 2010. He then attended Iowa Lakes Community College in Emmetsburg, Iowa graduating with an Autobody/Collison Repair degree. While attending school Mick enjoyed serving drinks and making people smile as a bartender at the Wild Rose Casino. Mick continued to follow his passion for autobody at his current position with Brambillas RV as the body shop manager, a job he thoroughly enjoyed.

Mick was never satisfied with average and was constantly striving for perfection in his work and his life. He took great pride in his car, motorcycle, his marvel comics, playing the drums, and his tattoos. Most of all he loved spending time with his family and many friends doing things like skateboarding, camping, listening to music, and playing video games. Mick lived and loved life to the fullest, he always had a smile on his face, had a great sense of humor. Mick loved whole heartedly and was a kind spirit who gave the best hugs.

Mick is survived by his mother, Jane Wright of Forest City; father, Paul (Cathy) Wright of Eagle Grove; siblings, Dr. Laila (Dustin) Buck of Forest City, Brooke (Jason) Johnson of Firestone, CO and Emily (Julian) Clausen of Eagle Grove, step brothers Danny Price and Tyler Price of Fort Dodge; nieces and nephews, Sully and Leo Buck and Quinn and Coraline Johnson; Amanda Gearty and her little boy Evan whom Mick loved with all of his heart, Mick’s precious cat, Mowgli, and numerous aunts, uncles and cousins. Mick will also be dearly missed by anyone lucky enough to be called his friend.

He was preceded in death by his grandparents, Alva and Beverly Wright, Doris and Rueben Olson, and Leonard and Mary Morphew.
To order memorial trees or send flowers to the family in memory of Michael "Mick" J. Wright, please visit our flower store.
Send a Sympathy Card