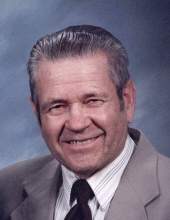 Funeral services will be held 10:30 A.M., Saturday, December 3rd at the Britt Zion Church of the Nazarene with Rev. Teresa Stecker officiating. Burial will be in Evergreen Cemetery in Britt.

Visitation will be held from 5 to 7 P.M., Friday at the Cataldo Funeral Home in Britt and will resume one hour prior to services at the church.

Myrlen Lamont Olsen, the son of Emmanuel and Bessie (Matson) Olsen, was born July 25, 1925 on a farm north of Britt. He attended country school near his home and graduated from Crystal Lake High School in 1942. Myrlen continued his education for one semester at Kletzing College in Oskaloosa, Iowa and then returned home to farm with his uncle, Alvin Matson. In 1948 he married Edna Keigley in Ames. They lived on the family farm north of Britt where they raised their three children, Larry, Rodney and Marlene. Edna passed away in 1969. On July 17, 1971, he married Virginia Henderson Cutkomp in Ogden, Iowa. Myrlen continued to farm until his retirement in 2011. He enjoyed his family and reading.

He was a member of the Britt Zion Church of the Nazarene and Gideons International.

He was preceded in death by his parents; first wife, Edna in 1969; second wife, Virginia in 2010; daughter, Marlene Nelson; son, Rodney Olsen; a sister, Audrey Meyers; and two brothers, Erval and Bernellyn Olsen.
To send flowers to the family in memory of Myrlen L. Olsen, please visit our flower store.