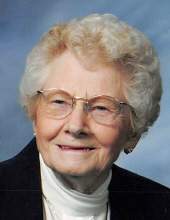 Funeral services will be held 10:30 A.M., Monday, October 22nd at the United Methodist Church in Garner with Rev. Paul Evans officiating. Burial will be in Concord Township Cemetery.

Visitation will be held from 2 to 4 P.M., Sunday at the Cataldo Funeral Chapel, 160 E. 4th St., in Garner with a combined VFW and American Legion Auxiliary service at 1:45 P.M. Visitation will resume one hour prior to services at the church.

In lieu of flowers, memorials may be directed to the Myrna Jass Schmidt Memorial Fund.

Myrna Elizabeth Jass Schmidt, the daughter of Guy and Stella (Lundy) Dodd, was born September 17, 1915 on a farm east of Klemme. She graduated from Clear Lake High School in 1932. Myrna continued her education for one year in post graduate education. In 1935, she moved to Garner and was employed as a clerk in several stores. On July 20, 1935 she was married to Arnold E. Jass at St. Paul Lutheran parsonage in Garner. They lived in Garner where they raised their family. After the death of her husband, Arnold, in 1976 she continued to live in Garner. On November 11, 1977 she married Walter Schmidt at the United Methodist Church in Garner. Myrna enjoyed Bible studies, Sunday School, and spending time with her family and friends.

She was preceded in death by her parents; husbands, Arnold in 1976 and Walter in 1995; brothers, Dean, Bob, Floyd, George and Ralph Dodd; and a sister, Lillian Pethick.
To order memorial trees or send flowers to the family in memory of Myrna E. Jass Schmidt, please visit our flower store.