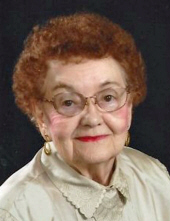 Funeral services will be held 10:30 A.M., Monday, June 25th at First Lutheran Church in Britt with Pastor Willie Rosin officiating. Burial will be in Evergreen Cemetery.

Visitation will be held from 3 to 5 P.M., Sunday at Cataldo Funeral Home in Britt and will resume one hour prior to services at the church.

Memorials may be directed to First Lutheran Church.

Nadine Charlotte Howlett was born July 11, 1921, to Melvin and Ninnette (Anderson) Thompson at Kanawha, Iowa. She was baptized and confirmed at Kanawha Lutheran Church. She received her education in the Kanawha schools graduating with the class of 1938 and then attended Waldorf College in Forest City. She married Jay Harold Howlett on March 21, 1940. To this union two children were born: Duane Allen and Karen Ann. They made their home on a farm in the Britt area until moving into Britt in 1979 and later to the Summit House. Nadine was a dedicated mother, homemaker and helper to her husband in their farming operation. Nadine was a supportive parent as she served as a 4-H leader, on the County Extension Committee, Britt PTA and Britt Music Mothers. Nadine was an Avon representative for six years. For 10 years Nadine and Jay delivered Winnebago Motor Homes providing them the opportunity to visit 49 states. It inspired them to travel to Hawaii, Canada, Norway and Mexico.

She was a regular active member of First Lutheran Church of Britt where she held many offices in the Women’s Organization. She was involved in the community through Neighborhood Clubs, Women’s Club, Nota Bena Book Club, Meals on Wheels and served on the election board. She served the Community Food Bank for 30 years and was a leader in establishing the Liberty School Museum in Kanawha.

She was preceded in death by her parents, husband, Jay Howlett; daughter-in-law, Carolyn Howlett; brother, Richard Thompson and his wife, Florence; brother-in-law, Clifford Howlett; and niece, Edythe Howlett.
To order memorial trees or send flowers to the family in memory of Nadine C. Howlett, please visit our flower store.
Send a Sympathy Card