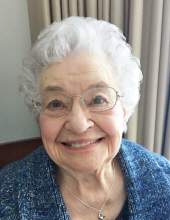 Funeral services will be held 11 AM, Friday, November 16th at the United Methodist Church in Garner with Rev. Paul Evans officiating. Burial will be at Memorial Park Cemetery in Mason City.

Visitation will be held from 4 to 6 P.M., Thursday at the Cataldo Funeral Chapel, 160 E. 4th St., in Garner with a combined American Legion and VFW Auxiliary service at 6 PM. Visitation will resume one hour prior to services at the church.

Memorials can be made in her honor to the United Methodist Church in Garner or the Garner American Legion.

Nellie Mae Bird was born on a farm in Fertile, Iowa, on January 19, 1922, the 3rd daughter of Birch and Barbara (Humphrey) Robison. She started her schooling in Fertile until the third grade, when her family moved to a farm east of Garner. She attended Concord #8 through the 8th grade and went on to graduate from Garner High School in 1939 at the age of 17. She attended Iowa State Teachers College in Cedar Falls for a year before she began her teaching career returning to Concord #8 for 3 years. She then taught at Lake #6 in Cerro Gordo county for 18 months. She met Albert Bird while teaching and when he left for the service he left her his car to drive back and forth to school. They were married on March 7, 1944 when Albert was home on furlough. She followed him to South Carolina for 3 months before coming back to Iowa. After his discharge in 1945 they began farming. Except for 6 years on a farm near Forest City, they spent their farming years in Hancock County until their retirement in 1979. They moved to Garner after retirement and her life became even busier.

Nellie was a Sunday School teacher, active in church circle and would help with anything that was happening at the Garner United Methodist Church. She was Historian for the American Legion Auxiliary, coordinator for the Red Cross Bloodmobile and did volunteer work in the elementary school with One-On-One Mentoring. She was an avid reader and loved to play any board or card game, especially Scrabble!

Nellie is survived by her four children and their families, Eldon (Ronda) Bird of Bettendorf, IA and their daughter Kimberly, David Bird of Ventura, IA and his four children, Pete Pattschull, Angie Pattschull, Brandon and Blake, Susan (Mike) Carr of Fairfield, IA and their two children, Jessica and Luke and Deacon Gordon (DiAnn) Bird of Lakeville, MN and their two children, Sarah and Seth; a daughter-in-law, Randy’s wife, Joan Bird of Rice Lake, WI and their three children, Matthew, Adam and Meredith; 31 great grandchildren; her brother, Birch (Ruth) Robison of Hilo, HI; and many nieces and nephews.

Nellie was preceded in death by her parents; husband, Albert in 1982; her oldest son, Randall; daughter-in-law, Jean; and five sisters.
To send flowers to the family in memory of Nellie Mae Bird, please visit our flower store.