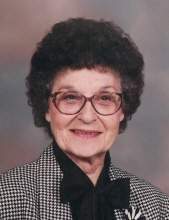 Memorial services will be held 11:00 A.M., Monday, June 17, 2019 at Immanuel Lutheran Church in Forest City with Pastor Zech Anderson officiating. Burial of cremains will be held in Madison Cemetery.

A gathering of friends and family will be held one hour prior to services at the church on Monday.

In lieu of flowers, memorials may be directed to the Forest City Senior Citizen Center.

Norma Jean Eddy was born to Glenn and Mary (Brink) Eddy in Swaledale, Iowa on February 28, 1929. She attended school in Swaledale, graduating in 1946. She then furthered her education at Hamilton’s Business College in Mason City. She was married to Robert Schaffer in 1947 and to this union two daughters were born, Jane Ann in 1948 and Rosemary in 1949. They later divorced in 1952. Norma was remarried to Glenn Hanson in 1955, with this marriage she was blessed with a son Stephen Hanson and the girls were blessed with a brother. Norma and Glenn were blessed with a daughter Sue in 1958. Glenn died in 1969; Norma and the children then moved into town from the farm; she worked at the Harrison Store and met Marvin King in 1975. She was married to Marvin King in 1977 at the Immanuel Lutheran Church in Forest City. They both enjoyed delivering Winnebago’s together traveling all fifty states including many places in Canada.

Marvin and Norma enjoyed spending nine winters in the southern climate. She also enjoyed playing games and cards with her family and grandchildren. Skipbo, scrabble and card games were some of her favorites. Norma had a huge loving heart, enjoyed helping anyone in need and most of all Norma had a huge sweet tooth!

Norma was a long-time member of the Immanuel Lutheran Church in Forest City where she was active in many different things through the years. She will be dearly missed by all who knew and loved her.

She was preceded in death by her parents; daughter, Rosemary Miller; husband, Marvin King; brothers, Glenn, Leo and Elmer Eddy and sisters, Ruth Martin and Marge Miller.
To send flowers to the family in memory of Norma Jean King, please visit our flower store.