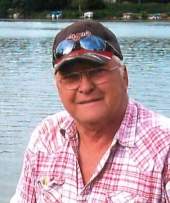 Norman "June" J. Hagen, 81, of Forest City, died Saturday, January 11, 2014 at the Muse Norris Hospice Inpatient Unit in Mason City. Memorial Services will be held 2:00 P.M. Friday, January 17, 2014 at the Lunder Lutheran Church, 14982 735th Ave. Albert Lea, MN with Pastor Randy Baldwin officiating. A gathering of family and friends will be held one hour prior to the services at the church. Inurnment will be held at a later date. Memorials may be directed to Hospice of North Iowa.
Norman John Hagen was born March 26, 1932 in Freeborn County, the son of Norman G. and Julia (Aanrude) Hagen. He enlisted in the United States Navy in 1950 and served on the USS Ulysses Minesweeper during the Korean War, he was honorably discharged in 1954.
He was united in marriage to Kaye Awe in 1966, to this union six children were born. Norman and Kaye farmed in northern Minnesota for sixteen years until moving to northern Iowa; here he worked for Fleetguard for thirteen years until retiring in 1997.
Norman enjoyed spending time at their cabin in Elysion, MN where he and his wife created many wonderful memories with family and friends. He also enjoyed hunting with his sons in northern Minnesota. Most of all Norman enjoyed the times he spent with his family. His best memories were made with his family and long-time friend Ellwood Hagen. He will be deeply missed by all who knew and loved him.
He is survived by his wife, Kaye of Forest City; children, Kimberly (Kim) Laffey, Darin (Cyndi) Hagen, Valerie Eldridge (Doug Abbas), Nicole Hagen, Nathan (Nichole) Hagen and Jill (Jerad) Grunzke; grandchildren, Troy, Tia, Alyssa, Amber, Gretchen, Logan, Jaidyn, Hannah, Rose, Kayelin, Shyenne, Marriah, Isaiah, Gianna, Randy, Brennen and Charli; great-granddaughter, Averi Kruger; brother, Lloyd (Doris) Hagen; sisters, Phyllis "Sis" Blake, Shawn Hagen, and Dawn Williams and many nieces and nephews.
He was preceded in death by his parents; brothers, Nolan "Bud" Hagen and wife Pat and Mervyl "Beeb" Hagen; brother-in-law, Richard Blake and sister, Norma Hagen.

To send flowers to the family in memory of Norman John Hagen, please visit our flower store.