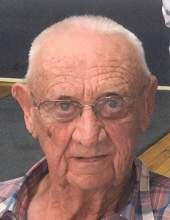 Visitation will be held one hour prior the services at the church on Wednesday.

Memorials may be directed to MercyOne Hospice North Iowa.

Norman was born at home on March 19, 1931 to Otis and Tillie (Midtgaard) Nyhus. He was baptized and confirmed (1946) at Ellington Lutheran Congregational Church. He started school in the country school and then transferred to Fertile and graduated from Fertile in 1951

He enlisted in the United States Army from Dec 5, 1952 to November 12, 1954, during the Korean War. He was in the artillery as a corporal and spent part of his service in Germany.

Norman was united in marriage on August 14, 1955 to Delores Morem at Ellington Lutheran Congregational church, whose name was later changed to Pilot Knob Lutheran. Norman has farmed with his dad and brother, Harold since they were kids. In 1998, Norman and Harold quit farming full time and rented the land to Norman’s son, Roger. He continued to help with the farming while his health would allow. Norman helped with doing custom work for neighbors like planting, combining, picking corn, shelling corn, trucking, and using a grain vac to clean out bins.

Norman and Delores owned 2 Winnebago motorhomes through the years. His hobbies were hunting, fishing, traveling and camping.

Norman was active in the WIT North Iowa Travelers club as a past president, Pilot Knob Lutheran church, Opportunity village, and was on the Forest City Co-op Oil Company board that later merged with the Farmers coop elevator.
Norman, Delores and Harold were winter Texans for several years. They enjoyed spending time with friend and taking tours.

He enjoyed taking his son, Roger, and grandson, Craig, prairie dog hunting in South Dakota. They went for several years with his brother Harold and Dana and Matt Swanson.
In October 2016, he had a stroke and could no longer stay on the farm. Norman and Harold moved into the Forest Plaza assisted living in Forest City. In April 2019 he entered Hospice care and due to his health requirement in May he was moved to Westview Care Center.

He was preceded in death by his parents, Otis and Tillie Nyhus, infant brother, his wife, Delores, and his son Ronald.
To send flowers to the family in memory of Norman Roger Nyhus, please visit our flower store.