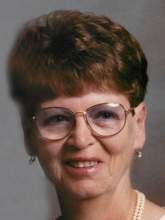 Orla Jane Smith, the daughter of George and Elsie (De Boer) Andersen, was born January 25, 1941 at Buffalo Center. She attended school at Titonka and graduated from Montrose High School. On June 27, 1959 she was married to Arlo L. Smith. They lived in Germany for a few years while Arlo was in the U.S. Army. Following his honorable discharge they moved to Montrose, Iowa and in 1980 to Garner. She had worked as an inspector at E.F. Johnson in Garner and Fleetguard in Lake Mills until her retirement. Orla Jane enjoyed spending time with family and friends, especially, her grandchildren, shopping for shoes, roller skating, singing, dancing and going to the movies.

She was a member of Order of Eastern Star.

She was preceded in death by her parents; and husband, Arlo, October 30, 2012.
To send flowers to the family in memory of Orla Jane Smith, please visit our flower store.