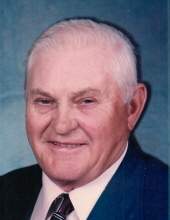 Visitation will be held from 1:00 P.M. till service time at the church on Friday. Burial will be held in Ellington Township Cemetery.

In lieu of flowers memorials may be directed to the Orrin B. Torkelson memorial fund in care of the family.

Orrin Bernie Torkelson was born October 12, 1922, the son of Osmund and Bessie (Olson) Torkelson in Hardy, Iowa, he was one of thirteen children. Orrin farmed around the Forest City area and also owned a construction business Torkelson Bros. Sand, Gravel and Excavating with his two brothers, John and Art.

Orrin married Marian Hickler from Minneapolis and they married in Farmington, MN on May 28, 1977. Orrin and Marian lived on acreage southeast of Forest City where they lived until they moved to Forest City on September 29, 2011.

Orrin enjoyed playing music, he shared his talents of singing and playing instruments with The Torkelson music group at many church and other venues in the area through the years. He also enjoyed spending time with his family. Orrin accepted the Lord as his Savior at 27 years old. Orrin was a witness for his Savior. He will be dearly missed by all who knew and loved him.

Orrin is preceded in death by his five brothers, six sisters, his parents and grandparents.
To send flowers to the family in memory of Orrin B. Torkelson, please visit our flower store.