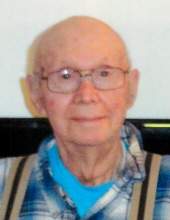 Memorial services will be held 2:00 P.M. Monday, April 27, 2015 at the Cataldo Schott Funeral Chapel with the Rev. Ed Bard, chaplain at Hospice of North Iowa officiating.

Inurnment will be held at the Oakland Cemetery in Forest City.

Owen K. Nelson, the son of, Sewell and Rosalia (Hanson) Nelson was born October 21, 1928 in Leland. He attended school in Leland and then began farming full time after the eighth grade to help his father. Owen started his employment at Winnebago Industries in1966 and worked there until his retirement in 1990. Owen enjoyed bird watching, fishing, reading, and spending time with his family and friends.

He was a member of Center Lutheran Church in rural Lake Mills.

He was preceded in death by his parents; brothers-in-law, Ken Anderson and Jim Koons; nephew, Karl Anderson; great niece, Kelly McCarthy; and great-great niece, Taryn Budach.
To send flowers to the family in memory of Owen K. Nelson, please visit our flower store.