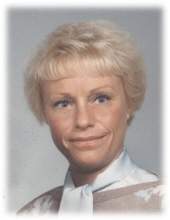 Visitation will be held one hour prior to services at the church on Thursday. Cataldo Funeral Home is in charge of arrangements.

Patricia Lynne Maben, the daughter of Herbert and Gelaine (Jensen) Irving, was born June 19, 1944 in Garner. She grew up in Garner and was a member of the Garner-Hayfield class of 1962. On September 11, 1965 she was married to Gary Maben at the United Methodist Church in Garner. They lived all of their married life in Garner. Pat worked as a bookkeeper and licensed insurance agent for Maben Insurance and Hancock Mutual Insurance Company for thirty-five years retiring in 2003. She enjoyed scuba diving, cooking, watching game shows and NASCAR racing.

She was a member of the United Methodist Church in Garner where had taught Sunday school, played the organ and belonged to UMW.

Pat is survived by her husband, Gary, of Garner; three grandchildren, Jeremy, Jenna and Dakotah Maben all of Garner; a great-granddaughter, Riley; two sisters, Carol (Paul) Anderson of Appleton, WI and Helen (Thomas) Sammons of Tyler, TX; and three aunts, Phyllis Quintus of Hampton, Eleanor Brozik of Garner and Norma Petit of Warsaw,Missouri.

She was preceded in death by her parents; daughter, Sarah; and sons, Scott and Jeff.
To send flowers to the family in memory of Pat Maben, please visit our flower store.