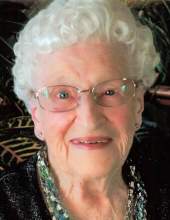 Funeral services will be held at 10:30 a.m., Friday, February 25, 2022, at Zion Evangelical and Reformed Church in Garner with Rev. Brian Lund officiating. The service will be livestreamed on the Cataldo Funeral Home Facebook page. Burial will be at Concord Township Cemetery.

Visitation will be held from 4:00 to 6:00 p.m., Thursday at Zion Evangelical and Reformed Church and will resume one hour prior to services at the church. Cataldo Funeral Home is in charge of arrangements.

In lieu of flowers, memorials may be directed to Zion Evangelical and Reformed Church or Gateway Hospice.

Pearl Gertrude Barkema, the daughter of Charles and Rose (Goll) Haes, was born October 5, 1919 on a farm west of Garner. She was baptized and confirmed at Peace Reformed Church south of Garner. Pearl attended the rural schools of Garfield Township and graduated from Garner High School. After high school, she worked various jobs in the Garner area. On January 16, 1946, she was married to Orval Barkema at Peace Reformed Church parsonage. They farmed west of Garner all of their married life. Pearl and Orval enjoyed wintering in Texas and later in Arizona. In 1996, she moved into Garner and later to Prairie View Apartments in Garner. She enjoyed her family, quilting, crafts, cooking, dancing at Duncan Hall and the Surf, playing cards and hosting Duesey Days at her State Street house. Pearl always made sure that everyone was well fed during spring and fall work delivering full course meals to the field. She attended her first Minnesota Twins game in Minneapolis at the age of 98.

She was preceded in death by her parents; husband, Orval in 1995; daughter, Delores Hrubes; and sister, Doris Olson.

To send flowers to the family in memory of Pearl G. Barkema, please visit our flower store.