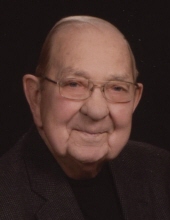 Peter Ray (“Pete”) Van Gerpen, 82, of Garner, formerly of Rake, died peacefully Friday, May 1, 2015 at Mercy Medical Center North Iowa in Mason City with his family at his side, after a long battle with rheumatoid arthritis and acute myeloid leukemia.

A Celebration of Life service will be held at 11:00 A.M. Tuesday, May 5, 2015 at Immanuel Lutheran Church in Forest City with Rev. Rod Hopp officiating. Private inurnment will be held at a later date.

Peter Ray Van Gerpen was born February 2, 1933 in rural Buffalo Center, Iowa, the son of Henry and Alice (Burma) Van Gerpen. He was baptized and confirmed at the First Reformed Church in Buffalo Center.

Pete’s early education began in the country school near his home and later continued in Buffalo Center, where he graduated in 1951. During his senior year his family moved to a farm near Rake. Six weeks later he met a girl, a freshman at Rake High School, named Lou Ann Russ. Thus began a romance that continued for 64 years. Having helped his father on the farm since his early youth, he decided that farming was the career he wanted to follow.

On July 17, 1955 he and Lou Ann were married at the Liberty Lutheran Church in Rake. They made their home on a farm 1 mile east of Rake, where they raised their 4 children, milked a herd of 35 cows, and enjoyed their life together. They became active members of Zion Lutheran Church where Pete at one time served as congregational president. They enjoyed attending all of their children’s school activities, and in later years those of their grandchildren.

They also enjoyed traveling, eventually visiting all 50 states and taking a trip to Germany where they visited the childhood home of Pete’s father and spent time with some of his relatives.
They also had fun cruising the Caribbean and Alaskan waters and boating with their family on Clear Lake.

In 1990 Pete was diagnosed with rheumatoid arthritis. He continued to farm as long as he could, but eventually had to cut down on the number of acres he farmed. They decided in 2007 that it was time to leave their home of over 50 years and to move somewhere close to one of their children, since Pete was becoming more and more disabled. They purchased a home in Garner and learned to love their new community. They enjoyed attending their grandchildren’s activities, and made many new friends in that way. They became members of Immanuel Lutheran Church in Forest City.

In late 2014 Pete was diagnosed with acute myeloid leukemia. He fought this disease bravely, but as complications set in he gradually became weaker and on May 1st he left us for the arms of God.

Pete is survived by his wife of almost 60 years, Lou Ann; his children; Lori (David) Stanley of Decorah, IA, Michael (Stephanie) of Cottage Grove, MN; Mary Jo (Todd) Horner of Logansport, IN; and Paul (Traci) of Garner; seven grandchildren, Nichole (John) Miller of Newburgh, IN, Kimberly Horner of Northfield, MN, Kaleb and Lauren Van Gerpen of Cottage Grove, MN, and Alexander, Tiara and Mackenzie Van Gerpen of Garner; two sisters, Elaine Boehm of Buffalo Center and Lila Hassebrock of Des Moines; a brother, Arnold (Julienne) of Lake Mills; one sister-in-law, Irene Russ of Crystal, MN; and many nieces, nephews and cousins.
He was preceded in death by his parents; Henry and Alice Van Gerpen; his grandparents; a brother Harold, who died at the age of 2 ½; his parents-in-law, Odin and Lillian Johnson; several brothers-in-law, and one sister-in-law.

He will be greatly missed and remembered as a kind, honest, gentle man who was very much loved.
To order memorial trees or send flowers to the family in memory of Peter R. Van Gerpen, please visit our flower store.
Send a Sympathy Card