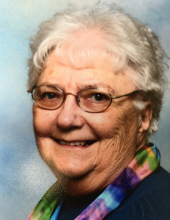 Funeral services will be held 10:30 A.M., Wednesday, May 25th at St. John’s Lutheran Church east of Garner with Rev. Carl Hedberg officiating. Burial will be in the church cemetery.

Visitation will be held from 5 to 7 P.M., Tuesday at the Cataldo Funeral Chapel in Garner and will continue one hour prior to services at the church.

Memorials may be directed to the St. John’s Lutheran Church Lift Fund.

Phyllis LaVonne Winkelman, the daughter of Arthur and Lydia (Jante) Hanselman, was born December 8, 1935 on a farm near LuVerne in Kossuth County, Iowa. She attended Garfield No.1 until the eighth grade and graduated from Garner High School in 1953. Phyllis continued her education at Wartburg College in Waverly for two years taking parish work courses. She worked as Dakota District Parish Worker in Florida, California, Spearfish, SD and Fargo, ND. On August 25, 1957 she was married to Edward E. Winkelman at St. John’s Lutheran Church near Garner. They farmed together south of Clear Lake until retiring in 1985 and moving into Clear Lake. Phyllis also was employed at Ventura Community Schools as a teacher’s associate, Unisys in Clear Lake and Park Clinic in Mason City. She loved God, her children, grandchildren and animals. She enjoyed playing cards, church activities and talking and laughing with people.

She was a member of St. John’s Lutheran Church where she belonged to LWML and taught Sunday school.

Phyllis is survived by her two sons, Bill (Barbara) Winkelman of Johnston, Iowa and Jim (Joanne) Winkelman of Clear Lake; six grandchildren, Thomas, Joseph, Paige, Wyatt, Walker and Reva Winkelman; a niece and nephew, Michael and Penny Winkelman; aunts, Evelyn Greiman of Garner and Norma Johnson of Manhattan, KS; and many cousins and other relatives.