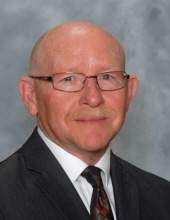 Funeral services will be held 10:30 A.M., Saturday, April 6, 2019 at St. Wenceslaus Catholic Church in Duncan with Fr. Jim Dubert officiating. Burial will be at St. John’s Catholic Cemetery in Duncan.

Ralph John Hejlik, Jr., the son of Ralph and Vlasta “Flossie” (Psotka) Hejlik, was born March 4, 1953 in Forest City, Iowa. He graduated from Garner-Hayfield High School in 1971. After high school, he received his bachelor’s degree from the University of Northern Colorado, Master’s degree from Iowa State University, and MBA from Riviera College in New Hampshire. He was united in marriage to Carolyn Best on December 17, 1977, at St. Boniface Catholic Church. They lived in New Hampshire for several years where Ralph worked for Anheuser-Busch and where Kelly was born in 1985. They returned to Iowa in 1986 and welcomed Emily in 1990. Ralph was the C.E.O. of Nation Job for 25 years. For the last three years, he enjoyed working with his nephew, Andy Hejlik, as a financial advisor. Ralph loved to golf, coach, teach, entertain, play cards, and work on home improvement projects. Most of all, he enjoyed spending time with his family and friends.

He was preceded in death by his parents; his father-in-law, Robert Best; and brothers-in-law, Larry Best and Joe Best.
To send flowers to the family in memory of Ralph J. Hejlik, Jr., please visit our flower store.