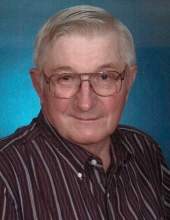 FOREST CITY – The woodshop is quiet today. The stacks of dried wood on the racks will have to wait for another carpenter. Ray Brcka passed away in his sleep on Saturday, July 18, 2015 at his home.

Funeral services will be held 10:30 A.M., Tuesday, July 21st at St. James Catholic Church in Forest City. Burial will be in the church cemetery.

Visitation will be held from 4 to 7 P.M., Monday at the Cataldo Schott Funeral Home, 505 N. Clark St., in Forest City with a Scriptural wake service at 7 P.M. Visitation will continue one hour prior to services at the church.

In lieu of flowers, memorials may be directed to the Raymond Brcka Memorial Fund which will be used to establish a building trades scholarship.

Ray was born March 27, 1942, the younger son of Edward and Rose (Jakoubek) Brcka. He grew up in the Duncan area, attending country school near Duncan, and graduated from Garner High School in 1959. Ray married Marjorie Becker in 1964 in Wesley, Iowa. They settled in Forest City, eventually living for 46 years in the home that Ray built from a sketch on the back of an envelope.

Ray was a builder. He started working for Francis “Sonny” Pitkin, and upon Sonny’s death in 1963, he went into partnership with Clarence Wellik in the construction business. Later, he started Brcka Construction, and became a partner in Southtown Building Supply. Throughout his career, he touched the lives of countless people while building or remodeling their homes. From a chicken coop for his grandkid’s chickens to the Atrium addition at Waldorf College, Ray took on many challenges. He excelled in quality & customer satisfaction, and was a highly regarded builder.

In his retirement years, he enjoyed doing woodworking projects in his shop, playing cards and making new friends while touring the area in the “Oscarmobile” with his dog Oscar and cat Marvin. Sunday afternoons were a treat for him when he could go horseback riding at Pilot Knob. Country oldies and polka music were always heard in Ray’s woodshop.

Ray is survived by his wife of fifty years, Marge, and three children: Patti (Bill) Kawalek and their son, Josh, of Forest City, Keith (Ann) Brcka of Fertile and their children, Brian and Carrie, and Kent (Holly) Brcka of Clear Lake and their children, Olivia, Alex and Nicholas, his brother, Frank (Marguerite) Brcka of Plymouth, and many nephews, nieces, cousins and other family members.
To send flowers to the family in memory of Raymond J. Brcka, please visit our flower store.