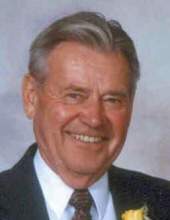 Raymond J. Prohaska, 88, of Clear Lake, went to his heavenly home on Saturday, November 30, 2019. He died at the Madrid Home in Madrid, Iowa from Alzheimer’s disease.

Visitation will be held from 4:30 to 7 P.M., Friday, December 6th at the Cataldo Funeral Chapel, 160 E. 4th St., Garner with a 4th Degree Knights of Columbus rosary at 4 P.M. Visitation will resume one hour prior to services at the church on Saturday.

In lieu of flowers, memorials may be directed to the Alzheimer’s Association, National Alliance of Mental Illness (NAMI of Iowa) or the Knights of Columbus St. Patrick’s Council #7898.

Raymond John Prohaska, the son of Leonard and Caroline (Rayhons) Prohaska, was born September 2, 1931 on a farm in Garfield Township, Hancock County. He attended the rural schools of Garfield Township and graduated from Garner High School in 1949. Ray served his country in the U.S. Army in Germany from 1953 to 1955 and liked to recall how Elvis Presley “replaced” him two years later at Friedberg in Company A, 40th Tank Battalion. On August 25, 1954 he married the love of his life, Marlene Clasen, at St. Wenceslaus Catholic Church in Duncan. They lived on a farm north of Garner where they raised their six children. Besides farming, Ray also worked for O’s Gold Seed Company. In 1975, Ray and Marlene moved to Parkersburg where he continued to work for the seed company in various management positions. In 1992, he retired and they moved to Clear Lake. They enjoyed the winter months in Bella Vista, AR and later McAllen, TX.

Growing up near the Garner airport, Ray developed a life-long passion for flying that led to a pilot’s license and airplane which he flew across the country for many years. He enjoyed golfing and was proud of his hole-in-one at Bella Vista, and he and Marlene enjoyed many O’s Gold sponsored trips throughout the world. Summer boating at Clear Lake was a favorite pastime for the family. Ray taught his kids to water ski and pilot the boat at a young age, although it was always clear that “Captain Ray” was the skipper!

Ray taught his children to respect and appreciate the Iowa farmland they were raised on. No matter where their lives take them, their roots will always be firmly planted in Iowa. Ray’s dedication to his family, faith and the values of his rural upbringing will live on through his family legacy.

He was a member of St. Patrick Catholic Church, Knights of Columbus 4th Degree and Catholic Workman FCSLA Branch w51.

He was preceded in death by his parents; infant son, Raymond Joseph Prohaska; brothers, Kenneth and Leonard, Jr. Prohaska; and brother-in-law, Charles Haaf.
To send flowers to the family in memory of Raymond J. Prohaska, please visit our flower store.