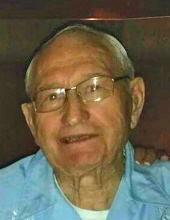 Funeral services will be held 10:30 A.M., Tuesday, June 28th at St. Boniface Catholic Church in Garner with Rev. Jim Dubert and Deacon Dennis Popowski officiating. Burial will be in the church cemetery with military rites by the Garner Veterans Ceremonial Unit.

Raymond Leonard Pool, the son of Albert “Alphus” and Rosie (Kalkas) Pool, was born July 17, 1928 at Humeston, Iowa. He grew up in Humeston where he graduated from high school. Ray served his country in the United States Air Force from August of 1948 to December of 1949. He continued his service as First Sergeant, Battery B, Field Artillery, 205th Brigade in the Air National Guard and Air Force Reserves for a combined thirty-six years. On September 6, 1958 he married Patricia B. Potter in Plymouth, Massachusetts. They lived in Garner where they raised their daughter, Melody. Ray was employed at the USDA Soil Conservation Service Office in Garner until his retirement in 1989. Ray and Pat moved to Plymouth, Massachusetts in 1990 and returned to Garner in 2003. While in Massachusetts, he worked for Ocean Spray for 12 ½ years, sang with the Plymouth Symphony Choral group, Marion Choral Society and St. Peter’s Choir.

Ray was active in his community and church. He was a member of St. Boniface Catholic Church and Knights of Columbus where he served as Grand Knight. Ray was a past member of the Garner Volunteer Fire Department for twenty-five years, was an active member of the Gifford Olson American Legion Post. No. 256 and the Garner Veterans Ceremonial Unit and was a mentor in the Garner-Hayfield School district for several years. He enjoyed gardening, music, singing, dancing, traveling and was an avid Civil War history buff. Ray loved to sit and talk with anyone, especially about politics, earning the name “Windy” at a young age.

He was preceded in death by his parents; sister, Irene Rockhold; brothers, Calvin and Melvin Pool; and son-in-law, Russ Piehl.
To order memorial trees or send flowers to the family in memory of Raymond L. Pool, please visit our flower store.
Send a Sympathy Card