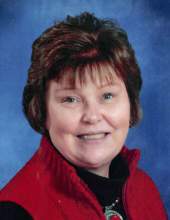 Rhonda J. Schuver, 69, of Belmond passed away peacefully, Thursday, July 15, 2021 at Mary Greeley Medical Center in Ames with family at her side after her second battle with cancer.

Visitation will be held from 5:00 to 8:00 p.m., Tuesday, July 20th at Cataldo Funeral Chapel, 160 E. 4th St., Garner and will resume one hour prior to services at the church on Wednesday.

In lieu of flowers, memorials may be directed to the Rhonda Schuver Memorial Fund.

Rhonda Joleen (Greiman) Schuver, the daughter of Ronald and Leona (Peterson) Greiman, was born October 22, 1951 at Forest City, Iowa.  She was baptized and confirmed at Zion Evangelical and Reformed Church in Garner.  She grew up on a farm southwest of Garner and participated in 4-H showing cattle and entered sewing projects, many of which, won purple ribbons.  Rhonda graduated from Garner-Hayfield High School in 1969 and then moved to Minneapolis, MN and worked at a bank.  On April 8, 1972 she was married to Allan Jenniges at Zion Evangelical and Reformed Church in Garner.  To this union a son, Cory was born. During this time she was employed by Winnebago for a number of years.  On July 2, 1982 she was married to Larry Schuver at the United Church of Christ in Belmond.  To this union a daughter, Chayna was born and she became a step mother to Chad and Clint.  They built their life, and business, in Goodell.  After her husband unexpectedly passed, Rhonda moved to Belmond. Rhonda had a multitude of talents, as evident by her various jobs throughout her adult life, including Flowers by Flattery in Garner, Four Seasons Travel and her own business, Crafter’s Delight in Belmond.  She retired from Allen Home Center in Belmond in 2016. It was no secret that she was looking forward to retiring, she very literally counted down the days for years.  She enjoyed traveling and going out to dinner with friends, shopping, watching sports, especially her son Cory’s high school wrestling team at GHV. She was an avid Hawkeye fan. She spent hours sewing and made many masks during Covid and shared them with family, friends and many of her daughter’s coworkers. She walked the Belmond bike trail, six miles every day, as long as it was at least 15 degrees outside. She loved being in nature. Above all else, Rhonda enjoyed spending time with her children and grandchildren, it was her Heaven on Earth.  Rhonda will be remembered by her beautiful smile, genuine joy and constant kindness. She radiated positivity. She was incredibly independent and strong and was determined to win this battle with cancer. She was a strong pillar for her family and will be greatly missed by all who knew her.

She was preceded in death by her parents; husband, Larry Schuver; brothers, Gary and Allan Greiman; parents-in-law, Billy and Grace Schuver; and brother-in-law, Eddie Schuver.
To send flowers to the family in memory of Rhonda J. Schuver, please visit our flower store.