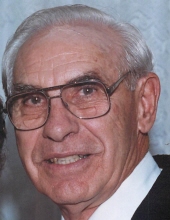 Interment will be held in Madison Township Cemetery.

Richard was born August 4, 1928 in Rolfe, Iowa, the son of Grant and Clover (Loveridge) Johnson where he grew up on the farm until 1944 when his family moved to rural Leland, Iowa. In 1947 he accepted Jesus Christ as his Lord and Savior and lived for Him the rest of his life. He followed the Lord in believer’s baptism and joined the Calvary Baptist Church in Forest City where he served the Lord. He had a strong faith in the Lord and wanted to share what the Lord had done for him with others.

Richard was married to Doris Smith on August 23, 1949 at Calvary Baptist Church in Forest City, to this union four children were born.

Richard loved the Lord and started each day by reading the Word and praying for his children, grandchildren and great-grandchildren, plus his friends and members of Calvary Baptist Church. Just before retiring at night he read from the Word and prayed again for his family, leaving them in the Lord’s hands. Richard loved the lord and was blessed to have a personal relationship with Him. Richard has now met his Lord and Savior and is enjoying his heavenly home.

He lived on the farm until 1990 when he and his wife moved to Forest City where they restored an older home and ran a Bed and Breakfast for twelve years. They also had a tea room on Main Street for five years. After retirement he enjoyed going to the farm and working.

Richard is survived by his wife Doris of Forest City; children, Nancy (Gordon) Larson of Forest City, Larry (Sally) Johnson of Owatonna, MN, Steven (Kay) Johnson of rural Leland; thirteen grandchildren; twenty four great grandchildren and one sister, Margaret Miller of Urbana, MO.
He was preceded in death by his parents and his first born son.

Richard was a beloved husband, father, grandfather and great grandfather, He loved his Lord and Savior Jesus Christ, with all his heart and is now with Him in heaven, he will be greatly missed by all who knew and loved him.

“I have fought the good fight, I have finished the race, I have kept the faith.” II Timothy 4:7
Richard started the race in 1947 when he was born again and finished well.
To order memorial trees or send flowers to the family in memory of Richard C. Johnson, please visit our flower store.
Send a Sympathy Card