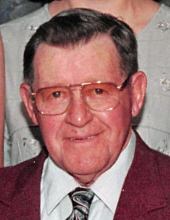 Visitation will be held from 5 to 7 P.M., Friday, July 12th at Cataldo Schott Funeral Home, 505 N. Clark St., Forest City and will resume one hour prior to services at the church.

Richard William Thompson, the son of William and Alpha (Hanson) Thompson, was born November 12, 1925 on the family home in Worth County, Iowa. He was baptized and confirmed in the Lutheran faith. Dick attended Forest City Community Schools. At the age of 17, he enlisted in the U.S. Navy and was stationed in Idaho. When the war ended, he returned to Forest City where he worked for various carpenters in the area. On September 24, 1950, he married Beverly Harris at St. Olaf Lutheran Church in Bode, Iowa. They made their home in Forest City where Dick built the home where he and Bev raised their two sons, Kent and Kirby. Dick owned and operated his own contracting business, Richard Thompson Construction which he continued until his retirement in 1987. He was known around town as “Hammer Dick.” Dick and Bev spent the winter months going south and living in their motor home. His main passion in life was restoring old cars in his “playhouse” with his friends. He restored a 1914 Ford Model T years ago that he drove in many parades. He also enjoyed going to flea markets and auctions.

He was preceded in death by his parents; wife, Beverly; and son, Kirby.
To order memorial trees or send flowers to the family in memory of Richard "Dick" Thompson, please visit our flower store.
Send a Sympathy Card