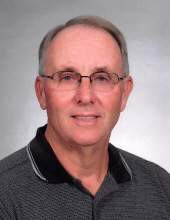 Visitation will be held from 9:30 A.M. until service time Saturday at the church.

Richard Henry Barker, the son of George and Josephine (DeWeerdt) Barker, was born May 21, 1943, the oldest of nine children. He graduated from Britt High School in 1961 and was drafted into the U.S. Army in 1966 serving his country during the Vietnam War. Following his honorable discharge, he returned to Britt. On January 24, 1970 he married Linda Eenhuis at St. Patrick’s Catholic Church in Britt. They lived in Britt where they raised their family and Richard was employed as a line foreman for Alliant Energy. After retiring from Alliant Richard and Linda traveled in their RV throughout the United States. Richard loved life and had a sense of humor. He enjoyed his family, fishing, golfing and farming.

He was preceded in death by his father, George; grandparents; and parents-in-law, Fred and Amelia (Lassahn) Eenhuis.
To send flowers to the family in memory of Richard H. Barker, please visit our flower store.