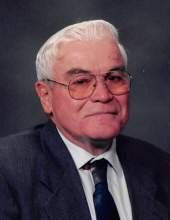 Funeral services will be held 10:30 A.M., Friday, February 12th at Redeemer Lutheran Church in Ventura with Rev. Jesse Burns officiating. Burial will be in Concord Township Cemetery in Garner with military rites by the Garner Veterans Ceremonial Unit.

Visitation will be held from 5 to 7 P.M., Thursday at the Cataldo Funeral Chapel, 160 E. 4th St., in Garner and resume one hour prior to services at the church.

Memorials may be directed to the Richard Hopper Memorial Fund.

Richard Herman Hopper, the son of Clyde and Mildred Jane (Bennethum) Hopper, was born on a farm near Cambridge, IA on May 19, 1923. The family farmed on many farms in the Colo area. In his early school years, he walked three miles to country school. During the depression years, Richard attended Colo Jr. High and High School graduating in 1943. On March 11, 1945 Richard married Marjorie Taylor, a school teacher from Garner who was teaching at that time in Colo, IA. After their marriage, Richard continued to farm and Marjorie taught school in Colo. In August of 1945, Richard entered the US Army as a C.I.C. Investigator in the Korean War. In 1946, after his military service Marjorie and Richard moved to Ventura Heights, IA. One of Richards’s initial jobs was harvesting ice off of Clear Lake. He also raised rabbits, raised and sold garden produce of corn, raspberries and potatoes. Richard worked at the Ventura Post Office for three years and at Geisel Hardware delivering bottled gas. When not busy, he was a well-known town handyman capable of doing just about anything. In 1948, Marjorie and Richard started their family with their 1st child, Richard Allen. In 1950, their second child, David Duane was born. Richard was hired by Northern Natural Gas and worked for this company for 32-1/2 years until retirement. In 1952, their 3rd child, Carolyn Jean was born. In 1955, Richard began building a new home in Ventura on Nelson St. moving to it in 1957. Retiring in 1984, Richard and Marjorie began working at their son David’s landscaping business, Natural Plus, in Clear Lake and even found time to help his adult kids in their various home improvement activities. Richard was a member of the Redeemer Lutheran Church in Ventura. He participated in the choir and held several offices within the church. Richard was also a very active Lions Club member and was instrumental in organizing and working the Septemberfest celebration held in Ventura every year. Many vacations around the world were taken along with visits to their families in Northern Minnesota and fishing the many lakes and rivers in that area.

He was preceded in death by his parents; wife, Marjorie in 2012; a great-grandson, David Holtan Hopper; two sisters, Mary Lawler and Dorothy Slaughter; and a brother-in-law, Francis Fraser.
To order memorial trees or send flowers to the family in memory of Richard H. Hopper, please visit our flower store.