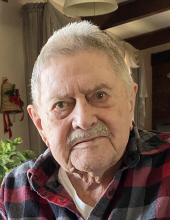 Visitation will be held one hour prior to the service at the church on Friday.

Robert Dean Baack, the son of Herman and Lillie (Blumer) Baack, was born August 17, 1929, on a farm near Klemme. He attended elementary school at Klemme and graduated from Klemme High School in 1949. After graduation, Bob was drafted into the U.S. Marine Corp where he was a cook for the officers. Upon receiving his honorable discharge, he returned home and farmed with his father. On November 20, 1954, he married Ruth Fuller at Trinity Lutheran Church in Mason City and to this union was born a son, Jeff and a daughter, Kris. Bob and Ruth were partners in farming until moving into Britt. Bob worked for Monte Miller and Sons until he retired. He enjoyed raising flowers and showing his unique designs to everyone who stopped by. Bob had a big vegetable garden and gave most of the excess produce away. Bob also enjoyed fishing trips to northern Minnesota, where he went for many years and also fishing the piers off Lake Michigan. Most of all he enjoyed the times his family came home for visits and being with his grandchildren.

He was a member of First Lutheran Church in Britt.

To order memorial trees or send flowers to the family in memory of Robert "Bob" D. Baack, please visit our flower store.
Send a Sympathy Card