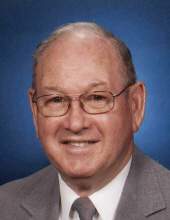 Funeral services will be held 9 A.M., Saturday, October 28th at St. Boniface Catholic Church in Garner with Fr. Jim Dubert and Msgr. John Hemann officiating. Following the service, his body will be donated to the University of Iowa, Department of Anatomy with burial at a later date in the church cemetery. Military rites will be conducted by the Garner Veterans Ceremonial Unit.

Visitation will be held from 4 to 6 P.M., Friday at the Cataldo Funeral Chapel in Garner with a Scriptural wake service at 3:30 P.M. Visitation will resume one hour prior to services at the church.

In lieu of flowers, memorials may be directed to St. Boniface Catholic Church, Parkinson’s Disease Foundation or Westview Care Center.

He was a member of St. Boniface Catholic Church in Garner and was a lifetime member of the Garner VFW.