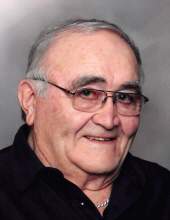 Funeral services have been rescheduled for 10:30 A.M., Thursday, January 26th at St. Boniface Catholic Church in Garner with Fr. Jim Dubert officiating. Burial will be in the church cemetery with military rites by the Garner Veterans Ceremonial Unit.

Robert Joseph Klesel, the son of George and Josephine (Freund) Klesel, was born February 14, 1931 in Britt. He grew up on the family farm northeast of Garner and attended rural school near his home. Bob was a proud veteran of the Korean Conflict serving his country in the U.S. Army. Following his honorable discharge, he returned home and farmed the home place. On January 23, 1960, he married Lucille M. Kriz at Sacred Heart Catholic Church in Osage. They lived on the family farm where they raised their three children. Besides farming, Bob also hauled milk in the Garner area. Bob continued to farm until retiring in 1996. He enjoyed collecting coins, watching Western movies, NASCAR and was an avid Iowa Hawkeye and Minnesota Viking fan. Bob had given 21 gallons of blood since he first started donating as a serviceman during the Korean Conflict.

He was a member of St. Boniface Catholic Church and the Garner VFW and American Legion.

He was preceded in death by his parents; wife, Lucille, Jan. 12, 2012; and brothers-in-law, Jim Busch, Jim Hanson and Ron Erdman.
To send flowers to the family in memory of Robert "Bob" J. Klesel, please visit our flower store.