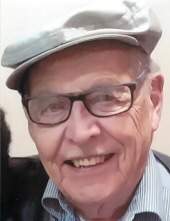 Visitation will be held at the funeral home on Thursday starting at 10:30 A.M. till time of funeral service.

Burial of cremains will be held in Oakland Cemetery at a later date.

Memorials may be directed to the Robert Adams memorial fund in care of the family.

Robert Dean Adams was born March 21, 1929 in Mt. Valley Township in Forest City, the son of Sidney E. and Alice (Larson) Adams. Robert was united in marriage to Frances Pauline Kiefer on June 4, 1949 at the Forest City United Methodist Church parsonage. They resided in Forest City, raising their four children, Pam, John, Robin and Peggy, plus 2 grandchildren, Mark and Amanda. Robert was employed by Central Iowa Telephone Co. and GTE from 1948 until his retirement in 1987.

He was a member of the Forest City United Methodist Church, Forest City Fire Department, Jaycees and Lions Club. Robert enjoyed many years of fishing, hunting, gardening, woodworking and camping with his family. In his later years, Robert took daily care of his wife Frances, they moved to Rockwell City and lived with his daughter, Pam. He will be dearly missed by all who knew and loved him.

Robert was preceded in death by his wife, Frances, their daughter, Peggy Sue and husband, Mark Mary III; his parents, Sidney and Alice (Larson) Adams; three sisters, Charlaine, Marlys and Helen and one brother, Eugene.
To order memorial trees or send flowers to the family in memory of Robert Dean Adams, please visit our flower store.