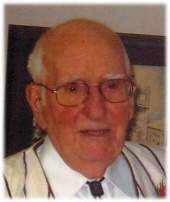 Funeral services will be held 1:30 P.M., Monday, August 19, 2013 at the United Methodist Church in Forest City with Rev. Charles Layton officiating. Cremation will follow with burial of the urn at a later date in Madison Township Cemetery.

Visitation will be held one hour prior to services at the church. Petersen Lund Funeral Home is in charge of arrangements.

Memorials may be directed to the Forest City United Methodist Church Elevator Fund or Hospice of North Iowa.

Robert Ellsworth Pletcher, the son of Winton and Emma (Rietz) Pletcher, was born December 2, 1917 at Eagle Grove. In 1918 he moved with his family to a farm southwest of Forest City where he attended country school. In October of 1934 he married Lorraine Albertson and to this union five children were born, Shirley, Faye, Robert, Marcia, LaRae and Darold, Lorraine's son from a previous marriage. Bob operated his own trucking and transportation business, Pletcher Transfer and Storage, for many years. He also delivered travel trailers for Forester Trailer and Winnebago Industries. In 1975 he sold his business and began farming and raising hogs until he retired in 1987. In 1990, he and Lorraine purchased a condo in Forest City. Lorraine passed away in December of 1991. In May of 1994, Bob married Irene Anderson of Britt. They lived in the condo in Forest City and spent their winters in Texas which they enjoyed very much.

Bob was a member of the Forest City United Methodist Church, IOOF Lodge, Forest City Lions Club and Forest City Development Group. He also served one term on the board of the Iowa Motor Truck Association. Bob proudly served as president of Kum Along Club for several years during the time of the planning and contract letting for the new Kum Along Club building which was built in 1990.

To order memorial trees or send flowers to the family in memory of Robert Ellsworth Pletcher, please visit our flower store.