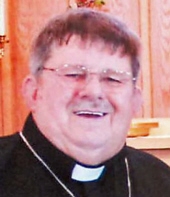 Memorial services will be held 10:30 A.M., Saturday, September 7th at St. John's Lutheran Church in Woden with Bishop Rodger Prois and Rev. Lauri Boysen, Dean officiating. Inurnment will be at a later date in Alabama.

Visitation will be held one hour prior to services at the church on Saturday. Cataldo Funeral Home in Woden is in charge of arrangements.

Robert George Wolfert, the son of James and Gladys (Patterson) Wolfert, was born March 8, 1945 in Queens, New York. Following high school, he continued his education at the Lutheran Bible Institute in Minneapolis, MN, Broward Community College in Ft. Lauderdale, FL, Florida Atlantic University in Boca Raton, FL, Newberry College in Newberry, SC, the University of Miami in Miami, FL and the Lutheran Theological Southern Seminary. Bob then served at the following churches, Holy Trinity in Key West, FL from 1976 to 1982, Luther Chapel in Homewood, MS and Providence in Burns, MS from 1982 to 1985, Solomon at Greeneville, TN from 1985 to 1986, Villas Hickory Hills in Gautier, MS as chaplain and rec. director, New Hope Lutheran Church in Sallis, MS from 1988 to 2000, Mt. Zion - St. Luke Lutheran Church in Oglethorpe, GA from 2000 to 2006, and then retired to his family home in northwest Alabama in September of 2006. He returned to the ministry serving Christ Church in Cullman, AL from 2006 to 2008 and Christ The King in Tupelo, MS from 2008 to 2010. His most recent churches were St. John's Lutheran Church in Woden and Immanuel Lutheran Church in Titonka.

Robert served on numerous Walk To Emmaus and Via DeCristo Spiritual weekends serving as a member of the spiritual team or "Emmaus" as the Spiritual Director. He also served more than 15 weekends at Georgia Prisons for Men and Youth Detention Centers for girls and boys. Bob also started the Food Bank Missionary in Olgethorpe, GA, was an EMT - intermediate, Emergency Room Technician for 8 years, a Conference Dean at North Mississippi Conference from 1997 to 2000 and the Fire Chief for the Sallis Volunteer Fire Department from 1989 to 2000. He was an honorary Conch member in Key West, FL and was active in the Lions Club.

He enjoyed spending time with his daughter and grandchildren, photography and golfing.

Bob was preceded in death by his parents; and two brothers, Jim and Richard Wolfert.
To order memorial trees or send flowers to the family in memory of Robert George Wolfert, please visit our flower store.
Send a Sympathy Card