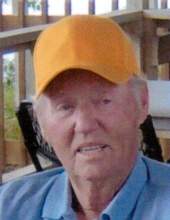 Robert L. Hanson, 78, of Leland, died peacefully after a brief illness Saturday, May 16, 2015 at the Muse Norris Hospice Inpatient Unit in Mason City.

Robert Hanson was born March 6, 1937 in Newton Township, the son of Herbert and Lenore (Mathews) Hanson. He attended country school and Lake Mills High School.
He was married to Ilene Storby on June 1st, 1956.
He worked on the family farm and was employed at Winnebago Industries for 28 years until his retirement in 1999. After retirement he and Ilene spent winters in Alamo, Texas from 1999-2015.
He enjoyed fishing, camping, playing pool and cribbage, watching golf and Wheel of Fortune, and mowing.

He was preceded in death by his parents; son, Herbert Jay Hanson in 2012; brothers Henry Hanson and Duane Hanson; parents-in-law, Irving Storby and Minerva Linde.
To order memorial trees or send flowers to the family in memory of Robert L. Hanson, please visit our flower store.