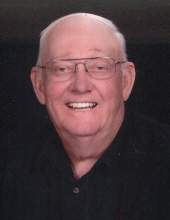 Funeral services will be held at 1:00 P.M., Wednesday, May 24, 2017 at Immanuel Lutheran Church in Forest City, with Pastor Zech Anderson and Pastor Rod Hopp officiating.
Visitation will be held 4:00 – 7:00 P.M. Tuesday, May 23, 2017 at Cataldo Schott Funeral Chapel, 505 North Clark St. Forest City, Iowa 50436 and also one hour prior to the service at the church Wednesday.

Burial will be held in Madison Cemetery in Forest City.

In lieu of flowers, memorials may be directed to the Rodney Westerberg memorial fund in care of the family.

Rodney Enose Westerberg was born November 27, 1935, the son of Rollie and Ruth (Tweeten) Westerberg in Forest City, Iowa. Rodney was raised east of Forest City and graduated from Forest City High School in 1953. Rodney was baptized and confirmed at Immanuel Lutheran Church, he was a life-long member and served on the board of trustees. In later years, he was a faithful listener to Immanuel services on the radio.

On October 30, 1955 Rodney married Rogene Baughman at Clear Lake, Iowa. Rodney was a life-long farmer, he had a pride for taking care of the land and harvesting a crop. Rodney enjoyed going on tractor rides, he did this up until his health failed him to do so. He enjoyed spending time with his family and friends and will be missed by all who knew and loved him.

Rodney was preceded in death by his parents; daughter, Dana in 1979; two brothers, one sister and his beloved dog, Speedy.
To send flowers to the family in memory of Rodney E. Westerberg, please visit our flower store.