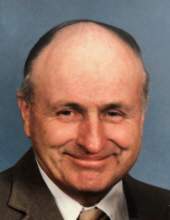 Roger A. Graber, 92, of Forest City, passed away Friday, February 1, 2019 at Westview Care Center in Britt.

Funeral services will be held 1:00 P.M., Tuesday, February 5, 2019 at Bethany Lutheran Church in Thompson with Revs. Rod Hopp and Doug Domokos officiating. Burial will be at Rose Hill Cemetery in Thompson. Military rites will be conducted by the Forest City Veterans Ceremonial Unit.

Visitation will be held from 4 to 7 P.M., Monday at Cataldo Schott Funeral Home in Forest City and will resume one hour prior to services at the church.

Memorials are preferred to KJLY Radio or Gideons International.

Roger Allen Graber, the son of Archie and Mabel (Bektjorden) Graber, was born August 3, 1926 on the family farm southwest of Thompson. He attended country school near his home. Roger served his country in the U.S. Army during the Korean War and was stationed in Germany. Upon his honorable discharge, he returned home and began farming as a third-generation farmer. On December 2, 1955 he married Olive Ullestad at Bethany Lutheran Church in Thompson. They lived on the family farm where they raised their three children. Roger continued to farm until 1991 when he retired and moved to Forest City. In 2012, he moved to Forest Plaza Assisted Living in Forest City and for the past 18 months resided at Westview Care Center in Britt. Roger loved to farm and was happiest when he was on the tractor.

He was preceded in death by his parents; wife, Olive in 1998; two sisters, Maxine Larson and Betty Lago; and brothers and sisters-in-law.
To send flowers to the family in memory of Roger A. Graber, please visit our flower store.