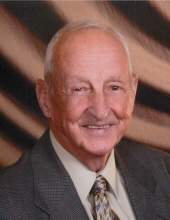 Burial will be held in the Pilot Knob Lutheran Cemetery.

In lieu of flowers, memorials may be directed to the Pilot Knob Lutheran Church.

Roger was born January 19, 1933 to Raymond Sr. and Lena (Kruse) Jennings on a farm in Barton Township near Northwood. He was baptized and confirmed at Concordia Lutheran Church. Roger attended country school in Worth county until he entered Hanlontown High School where he graduated in 1951.

It was in high school where Roger met the love of his life. He was united in marriage to Marian Peterson on August 25, 1951. Roger and Marian were always together. If you saw one of them, the other one was almost always there. They celebrated 67 years of marriage last August.

Roger worked for the Hanlontown Elevator until he and Marian moved to a farm west of Fertile in 1953. This became their lifelong home, where they raised their three children and continued to live together throughout their retirement.

He loved to farm and raise livestock, especially cattle. It was his passion for cattle that led him and his brother, Ralph, to purchase the Cow Palace Sale Barn in Forest City in 1971. For over 20 years, the "The Jennings Brothers" Cow Palace was a thriving business in Forest City and a main meeting place for area farmers. In addition, Roger and his brothers, Ralph and Raymond Jr., owned and operated Jennings Brothers Auctioneering.

After retirement from the sale barn, Roger continued to raise cattle on the farm, but he also developed a love for gardening. He and Marian spent countless hours tending to, weeding, and maintaining beautiful flower gardens at their home that they enjoyed throughout their retirement years. Roger loved to work, however, he really got a big smile and that special twinkle in his eye when he was spending time with his grandchildren. He adored them and made it a priority to see and spend time with them.

Roger served on various boards throughout the years, including the Hanlontown Elevator Board, the Board of Directors for Pioneer Federal Savings and Loan, and the Pilot Knob Lutheran Church Council.

Roger was preceded in death by his parents; brothers, Raymond Jennings Jr. and Ralph Jennings; mother and father-in-law, Roy and Gail Peterson; brothers-in-law, Arden Bergan and Marvin Peterson.
To order memorial trees or send flowers to the family in memory of Roger A. Jennings, please visit our flower store.