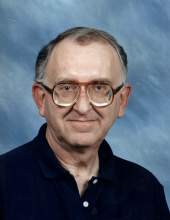 A memorial mass will be held 10:30 A.M., Friday, September 28th at St. Wenceslaus Catholic Church in Duncan with Fr. Jim Dubert officiating. Inurnment will be at St. John’s Catholic Cemetery in Duncan.

Roger Alan Urich, the son of Rudy and Dorothy (Brcka) Urich, was born January 5, 1942 in Garner. He attended Hayfield Consolidated school until 1959 when they consolidated with Garner for his senior year. He was active in sports and especially music where he was an excellent trombone player. He continued his education at the University of Iowa and Iowa Tech (currently Indian Hills Community College) where he graduated as a Computer Systems Analyst. In 1964, he married Elaine Knutson and to this union two boys were born, Michael and Matthew. Roger was employed by Mutual of Omaha and then Central States of Omaha. He moved up the ranks of the business becoming manager of Systems and Procedures in 1979. Although he did well in the computer world, Roger loved designing, building and yard work. In his late 40’s he decided to move back to smaller, friendly Garner. There he landscaped homes in the area as well as at the high school. Recently, Roger completed the requirement to become a Master Gardener in Iowa. Along with photography, he enjoyed sports such as golf, tennis and bowling. He was also an avid Iowa Hawkeye fan!

Roger is survived by his two sons, Mike (Jill) Urich of Ankeny and their daughter, Melody, and Matthew (Shirley) Urich of Council Bluffs and their two children, Mollie and Jayden; two siblings, Robert (Billie) Urich of Windsor, CO and Carmen Urich of Fort Collins, CO; and two nieces, Julie and Jennifer Urich.

He was preceded in death by his parents; and a brother, Gerald Urich.
To send flowers to the family in memory of Roger A. Urich, please visit our flower store.