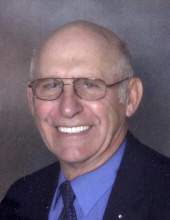 Visitation will be held from 2 to 5 P.M., Sunday at the Cataldo Funeral Chapel in Woden and will resume one hour priori to services at the church.

Roger Chester Missman, the son of Robert Chester “Chet” and Bernice Ruth (Murr) Missman, was born July 10, 1937 on the family farm south of Woden. He attended the rural schools of Bingham Township and graduated from Woden High School in 1955. Roger served his country in the U.S. Air Force. On November 15, 1957 he married Janice Aukes at First Congregational Church in Buffalo Center. They made their home on a farm near Thompson where they raised their family. Roger retired from farming in 2002 and in 2011 he and Janice moved into Buffalo Center.

He was an active member of First Congregational Church where he served in many capacities including as a trustee, deacon and Sunday school teacher. Roger served on the Thompson Community School Board as a member and past president and belonged to Gideon’s International. In his late 40’s, he obtained his private pilot license and enjoyed flying planes for many years.

He was preceded in death by his parents.
To send flowers to the family in memory of Roger C. Missman, please visit our flower store.