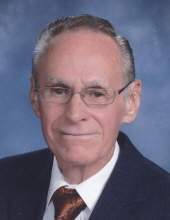 Visitation will be held from 5 to 7 P.M., Wednesday St. Boniface Catholic Church in Garner with a Scriptural wake service at 7 P.M. Visitation will continue one hour prior to services at the church. Cataldo Funeral Home is in charge of arrangements.

Roger John Brady, the son of James “Jim” and Caroline “Carrie” (Steiner) Brady, was born July 21, 1938 in Thompson, Iowa. He attended and graduated from Woden High School in 1956. Roger served in the United States Navy from May 23, 1956 until his honorable discharge in July 1959. On September 7, 1963 Roger was united in marriage to Sonja Tegtmeyer in Buffalo Center. The couple made their home in Woden before moving to Garner in 1967. Roger worked as an over the road truck driver for many years before retiring in 2000. After he retired, he worked at Boone Valley Implement for 15 years. Roger enjoyed his family, having morning coffee with friends, collecting toy tractors and also keeping busy with projects at home and on the acreage.

He was a member of St. Boniface Catholic Church in Garner, Garner VFW and the Garner Veterans Ceremonial Unit.

He was preceded in death by his parents; brother, Edward Brady; brothers-in-law, Lawrence Swanson, Kenneth Tegtmeyer, Arnie Gerdis, and Evan Heleotes; and a sister-in-law, Frances Swanson.
To order memorial trees or send flowers to the family in memory of Roger J. Brady, please visit our flower store.