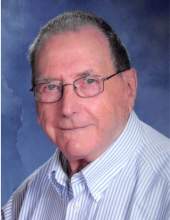 Funeral services will be held 10:30 A.M., Tuesday, November 3rd at St. Boniface Catholic Church in Garner. Burial will be in the church cemetery with military rites by the Garner Veterans Ceremonial Unit.

Visitation will be held from 5 to 7 P.M., Monday at St. Boniface Catholic Church in Garner with a rosary at 4:30 P.M. Visitation will continue one hour prior to services at the church.

Roland Francis Schmidt, the son of Leo and Rose (Roach) Schmidt, was born January 31, 1923 in Mason City. He graduated from Garner High School in 1940. Roland served his country in the U.S. Army from February 22, 1945 until his honorable discharge on February 21, 1946. On May 18, 1948 Roland was united in marriage to Lucille Koppen at St. Joseph’s Catholic Church in Wesley. The couple made their home in Garner where they spent all of their married life. Roland was employed at the United States Postal Service in Garner from 1947 until his retirement in 1972.

He was a lifetime member of St. Boniface Catholic Church and charter member of the Garner VFW where he served as a service officer for 30 years.

Roland was preceded in death by his parents; and his brother, Gerald (Rosella) Schmidt.

In lieu of flowers, memorials may be directed to Opportunity Village in Clear Lake.
To send flowers to the family in memory of Roland F. Schmidt, please visit our flower store.