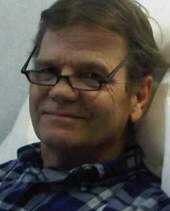 As per his wishes, his body has been cremated.

Ron A. Jordan was born in Fort Fairfield, Maine on March 18, 1959, the son of Jon L. and Marcella (Pedersen) Jordan and the late Jerry Gaines. When he was a young child the family moved to El Paso, Texas and later to Abilene, Texas.

When Jon went to Vietnam, the family made their home in Atlantic, Iowa. It was in Atlantic that Ron attended school and was active in sports, especially the swim team.

Ron and Ellen came to Forest City in 1982. They were married at Immanuel Lutheran Church on June 2, 1984. Ron was the owner and operator of his own contracting business his entire life. He loved nature and being outdoors whether it was camping or golfing. He was a very competitive sportsman and always played to win. Ron volunteered for the Boy Scouts for many years as a group leader.

It was this same determined nature that carried him through 14 months of difficult treatment for esophageal cancer. He never quit trying.

He is survived by his wife Ellen of Forest City; their sons Travis (Tracey Peterson) Jordan of Garner and their children Claire and Sophia and Levi Jordan of Forest City and Ellen's daughter Alexia (Trevor) Zeller and their son Trevor of Sparta, WI. Ron's mother, Marcella Gaines of Atlantic, IA and four brothers, Jon Jordan, Kim Jordan, Jay Jordan, and Jerry Gaines Jr.

Ron was preceded in death by his father, Jon L. Jordan and his step-father, Jerry Gaines.
To order memorial trees or send flowers to the family in memory of Ron A. Jordan, please visit our flower store.