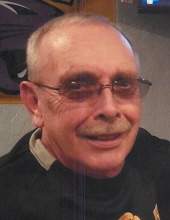 In lieu of flowers, memorials may be directed to the Ronald Johnson memorial fund in care of the family.

Ronald Lee Johnson was born August 14, 1949 in Buffalo Center, Iowa, the son of Henry and Amelia (Berhow) Johnson. He attended and graduated from Lakota High School. Ron was united in marriage to Joyce Leonard in 1969; to this union two daughters, Traci and Tresa were born and they later divorced. He was remarried to Julie Asche in 1991 and to this union, one son, Trevor was born; they later divorced.

Ron worked for Winnebago Industries and Ley Motor Company for many years. Ron had a passion for helping people and he found his true calling as a Paramedic. He worked for Snell’s, the Forest City Ambulance Service and with Van Diest Medical Center in Webster City, where he retired in 2015. Ron enjoyed fishing, shooting guns and hunting. He enjoyed spending time with his friends and family, especially his children and grandchildren. He will be dearly missed by all who knew and loved him.

He was preceded in death by his parents and two brothers-in-law, Arden Slattum and Richard Groh.
To order memorial trees or send flowers to the family in memory of Ronald Lee Johnson, please visit our flower store.