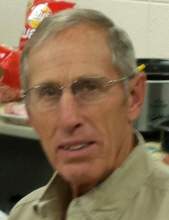 In lieu of flowers memorials may be directed to the Faith Lutheran Church in Miller.

Rod was born on the family farm north of Miller, IA on October 30, 1938. Being the second oldest, he grew up with a large family with four brothers and many cousins. He graduated from Forest City High School in 1957 where he was all conference in football, ran track, and was crowned the North Iowa Skating King in 1959. After high school he enlisted in the US Army Reserves and then enrolled in an automotive trade school in Omaha, NE.

He married his wife, Donna (Teigen), of Lake Mills, on May 12, 1962 at Faith Lutheran Church in Miller, IA. They have two beautiful daughters, Tammy (Ron) Schafer and Paula Vaughan both of Forest City. He was employed by Massey-Ferguson in Clarion, IA and then Garner, IA where he worked as a mechanic. He then transitioned to the Iowa DOT starting in 1971 out of Forest City and then out of Hanlontown until he retired in 2003. Rod was continuously active and worked at Weiland Farms in Garner for 50 years during each harvest and helping when he could. He enjoyed wintering in Texas to get away from the cold.

He loved to dance, skate, listen to old country music, and spend time with his many friends and family. He was active in each of his grandchildren’s lives and would be at their extracurricular events where he would always find a friendly face to strike a conversation with.

Rod is preceded into death by his parents, Florence and Ernest, his brother, Gene, his nephew, Todd, and his beloved wife, Donna. He is survived by his brothers, Arlo, Carroll, and Joel. His daughters, Tammy and Paula, his grandsons, Steven and Randy (Paula), and Dylan (Tammy), and his granddaughter, Hannah (Paula), all from Forest City and his special friend, Margaret Hall and her family of Mason City as well as many nieces, nephews, cousins, aunts, uncles, and loved ones.

The family would like to express their gratitude to the overwhelming support of the community during this time and know that he will be missed by many.
To send flowers to the family in memory of Ronald "Rod" LeRoy Hanson, please visit our flower store.