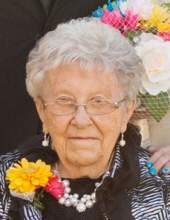 Funeral services will be held 11 A.M., Saturday, September 26th at St. Joseph Catholic Church in Wesley. Burial will be in St. Boniface Catholic Cemetery in Garner.

Visitation will be held from 9 A.M. until service time at the church. Cataldo Funeral Home in Garner is in charge of arrangements.

Memorials may be directed to St. Joseph Catholic Church.

Rose Marie Kern, the daughter of John and Mary (Hadacek) Zrostlik, was born May 9, 1924 on a farm south of Duncan. She attended rural school in Liberty Township until the eighth grade and then helped on the farm. On August 11, 1958 she was married to Ambrose Kern at St. Wenceslaus Catholic Church in Duncan. They live in Garner for a short time before moving to Miller where they owned and operated the Miller Feed Store until they retired in 1986. After Ambrose passed away in 1987, she continued to live in Miller until moving to Wesley in 1992. She enjoyed spending time with her family and loved to bake and cook, especially, Kolaches.

She was a member of St. Joseph Catholic Church in Wesley.

She was preceded in death by her parents; husband, Ambrose; and siblings, Joe, George, John, Paul, Mary and Betty.
To send flowers to the family in memory of Rose M. Kern, please visit our flower store.